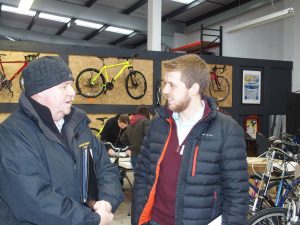 Managing Director Del Hall supported the JOLE RIDER Scrap Heap Challenge for sixth formers from across Gloucestershire last week, who were challenged to compete an engineering bike related task with an African theme. Inspired by a young Malawian school student William Kamkwamba, the five teams of sixth formers were tasked to design and build a way of generating light using a bicycle mounted on a baseboard. Based on this real-life issue the task was to demonstrate a workable design to enable a workstation mounted on their bikes to be lit through bicycle power enabling home-study.

As support to this challenge Del Hall worked alongside members of JOLE RIDER and The James Dyson Foundation, supporting students with this task throughout the day and as a member of the overall judging panel.

Teams presented their prototypes and were judged on their overall achievement of the brief, decision-making and design & workmanship. As a Design Engineer, Del Hall was proud to support this initiative which was to engage and excite the next generation of creative and socially aware Engineers.

This challenge, which was founded on the popular TV programme “SCRAP HEAP CHALLENGE” for use of materials and inspired by African student William Kamkwamba. It was pioneered by engineers from Network Rail and was conceived by JOLE RIDER based in Tetbury who for the past 10